Shuriken refers to Japanese throwing stars. Ninja Shuriken is literally translated from sword hidden in the user’s hands. These Ninja Weapons are used for throwing, stabbing and slashing.

The Ninja Shuriken is sharpened and can be made from ordinary tools that easily can be found like needles, knives, and nails. however, the traditional ones are made from flat plates of metal.

Shaken is taken from the Japanese reference to throwing star. These were designed in different shapes. These are classified into several varieties like: Bo Ninja Shuriken, Stick Ninja Tools, Kurumaken or shape like a wheel and Hira Shuriken.

These Ninja Weapons are actually supplementary tools for the sword and other similar Japanese weapons. The art of welding this weapon is referred to as Shurikenjutsu.

The art of Shurikenjutsu is considered a secret art because according to Japanese history there were many independent exponents of the skill of throwing long thin objects such as these ninja weapons.

Training for this kind of weapon was incorporated in many famous martial art schools. 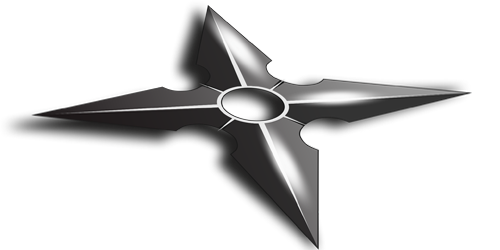 It is considered a complicated task to track down when Ninjas start to use Shuriken. Since these Ninja Weapons were invented with the use of ordinary tools it is hard to pinpoint the exact date. Among the common weapons used includes:

In Primeval time, stones were hurled to scare away animals and would-be attackers. Later on, skills on how to throw various objects use in hunting and fighting were developed. These were refined to and perfected.

However, the road between the use of these prehistoric tools and that of gaining the skills to fight using Ninja Shuriken is a long one. Using these Ninja Weapons is an amalgamation of various arts.

The earliest weapon to show the origin of using these weapons can be found in ancient accounts of Japanese battles. An old name was given to objects thrown at prey when hunting or fighting enemies during combat were referred to as Totekibujutsu.

Earlier forms of these were ordinary stones.

Based on their characteristics Shuriken can be divided as follows:

These can be round, triangular, square, pentagon or octagon in shape. However, there are cases when there are two points like Ryobarigata. The weight depends on the length and diameter of these throwing stars. Star shapes are easy to make and conceal.

Needle shape Shuriken resembles a large needle. This is a Boshuriken and remains famous until today. These consist of a straight iron or steel pike.

These are four-sided but, can be round or octagon in shape. Some versions have points on both ends. This is not a Kunai that is used basically for stabbing and thrusting. Bo-Shuriken comes in different forms.

These are thrown in various ways such as underarm, sideways, rearwards, and overhead. In each of these cases, the blade slides out of the hand through the fingers in a smooth controlled flight.

This resembles the popular concept of what this weapon is recognized. These are constructed from thin flat plates of metal derived from different sources like coins, carpentry tools, and even nail removers.

These have holes like the ones found in washers. This is convenient for the user since he can easily strung this weapon in the belt when he travels. The aerodynamics and weight effects of carrying it this way make it easy to travel with these Ninja tools.

Star, cross or disc shape
Search
Samurai Swords
Custom Swords
We use cookies to ensure that we give you the best experience on our website. If you continue to use this site you understand and agree to the use of cookies and accept them.I AgreeRead more