Kusarigama is traditional Japanese weapons consisting of a sickle attached to a heavyweight. The Shogi is a variation of the Ninja Kusarigama. Shogi has a Kama-yari or sickle spear point.

This adds an advantage because it opens possibilities on how the weapon is used. The chain is substituted by a rope. This reduces the weight of this weapon. The noise produced by the sound of the weight is also remarkably reduced.

The heavyweight at the end was substituted with a metal ring. As a result, the Ninjas were able to use these as Ninja Tools for different tasks.

The change in the materials used for Kusarigama was brought about by the oppressive policies of the Okinawan kings and the occupying of Samurai forces. There were not a lot of Ninjutsu masters that know how to wheedle the Ninja Kusarigama.

Historical records show that there were incidents when chain-type weapons used by the Ninja. Unlike the Shuriken this is not a weapon for Ninjas only. It was originally used as a self-defense tool for people who dislike applying for a permit to carry a sword.

Those who prefer using this weapon include farmers, craftsmen and even merchants who travel back and forth selling their wares. Kusarigama is compact that a man can conceal this inside his clothes.

A Ninja or individual who uses this weapon must have the superior ability or learn the right skills to create a good impact against his enemy whether on the battlefield or not.

Katawa-Furi (Circular Swings). The chain flies and tangles the right arm. The opponent is a strike to the neck and takedown using this motion. Another movement is to strike through the chest and groin.

There is a requirement to gain better mastery of these Ninja Tools. It is considered as a martial arts specialization in the field of Chain Art. This is when the Kusarigama were fitted with two weighted chains near the blade.

Some attached one weighted chain near the blade while others attached this to the base of the handle. The length of the chain will depend on the preference of the user.

Since Kusarigama was used by both men and women they created a distinction referring to Onnagama as sickle for women while Otokogama as those for men. The version made for the men was slightly bigger and the hilt was long.

The length of the chain in earlier versions are long. Kusarigama is used to make trips, blocks, and jabs while the ball is whipped around at high speeds to smash against the opponent.

Suffice to say that the use of this weapon demands excellent skills to be able to properly utilize it in the best possible way. A weapon that proves effective or superior on the battlefield will gain popularity as warriors adopt it as a weapon of choice. 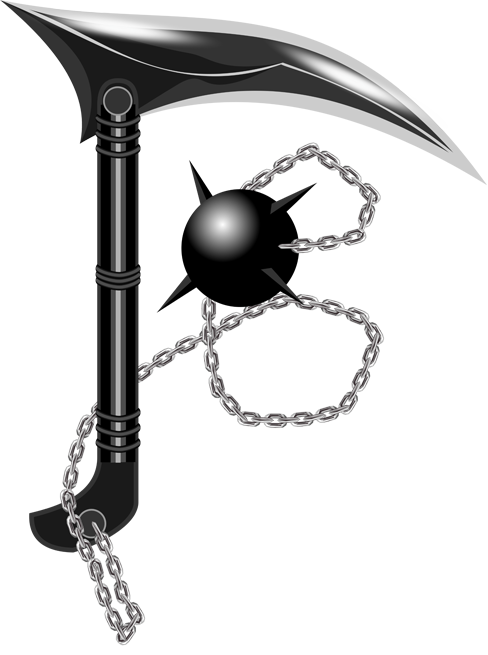 Technically speaking, Kusarigamajutsu is a combination of different combative art that focuses on the use of Kusarigama. The fighting methods used for these Ninja Weapons will depend on the type of Ninja Kusarigama used.

Attacking with the use of the Ninja Kusarigama entails swinging the weighted chain in a large circle over the user’s head. This is done in order to be able to entangle the opponent’s spear, sword or other forms of weapon.

This movement will also immobilize the arms and legs of the opponent. This will also allow the Kusarigama user to rush forward and strike using this sickle weapon.

Search
Samurai Swords
Custom Swords
We use cookies to ensure that we give you the best experience on our website. If you continue to use this site you understand and agree to the use of cookies and accept them.I AgreeRead more