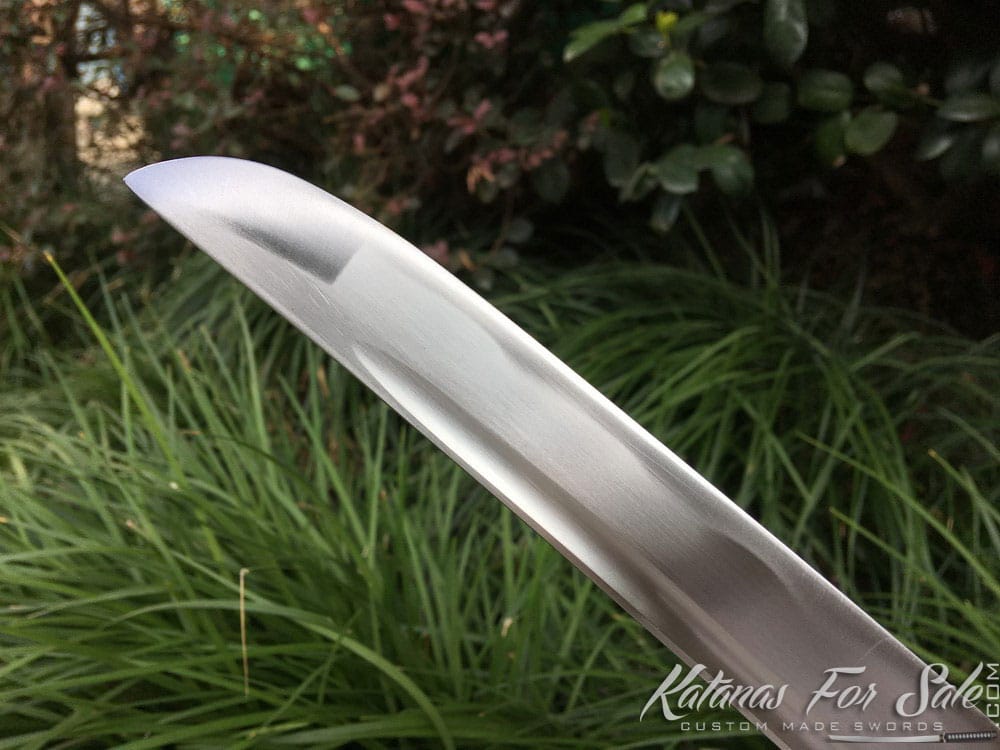 The Niku sharpening is an everlasting topic when it comes to choosing the edge of a sword or knife. Today you’ll finally discover what’s it for and how does it affect your blade.

Deciding what’s the best edge for a sword is like deciding how much sugar to put in your coffee. Pour too little and it will be bitter. Pour too much and you’ll end up with a drink that can induce diabetes with one sip.

When we talk about the sharpness of a sword, “the sharper the better” might sound logical at first. However, like coffee with too much sugar, opting for a too sharp samurai katana can end up being counterproductive.

If you are thinking of buying a katana, you have probably arrived at the dilemma of the sharpness of the sword. You’ve seen this thing called “Niku sharp” and you wonder: Is Niku sharp good? What’s so special about it? Should I order it for my sword blade?

We got you covered!

In this post we’ll tell you everything you need to know about Niku sharpening, and help you decide if it’s what you need for your sword.

What is Niku Sharp?

The Niku is a type of sharpness that allows the blade to retain much of its thickness just behind the cutting edge. In this way, the blade becomes considerably thicker and more resistant in exchange for sacrificing some cutting ability.

Niku translates as meat, as it is understood as the covering of the sword. While the bones have muscle (meat) that protects them, the blade of the sword has Niku, which prevents the sword from being easily damaged.

An object that usually has a lot of Niku is the survival knives.

Unlike knives created for precision tasks such as boning a fish or performing the fine art of wounding an opponent, survival knives are created to resist all the mistreatment you can put them through.

They are made for you to cut wood, split canes in half, break bones in two, stuck them in the ground, and more. If they were made like all the other knives, Bear Grills would bury his head in his hands every time he tries to build a shelter.

Instead, these blades are made to resist.

How does it work?

If you look closely, you’ll notice that the edge of the blade has a wider angle than that of conventional blades. This allows it to withstand all kinds of damage without cracking. The only disadvantage is not being as sharp as it could be.

There are some objects that rely solely on a Niku blade, like machetes and axes. They don’t use its edge as much as its geometry when cutting. These tools will cut based more on the strength of the hands behind the handle than on the accuracy of their edge. That’s why they are used for gardening tasks and not for boning fish.

Does this mean that Niku-edged blades don’t cut?

The Power of Niku Sharpening

What we mentioned above are tools that depend almost exclusively on their Niku. But there are different kinds of Niku grades. It’s not the same the Niku you’ll find on an axe intended to cut wood than the one you’ll find on a Katana. 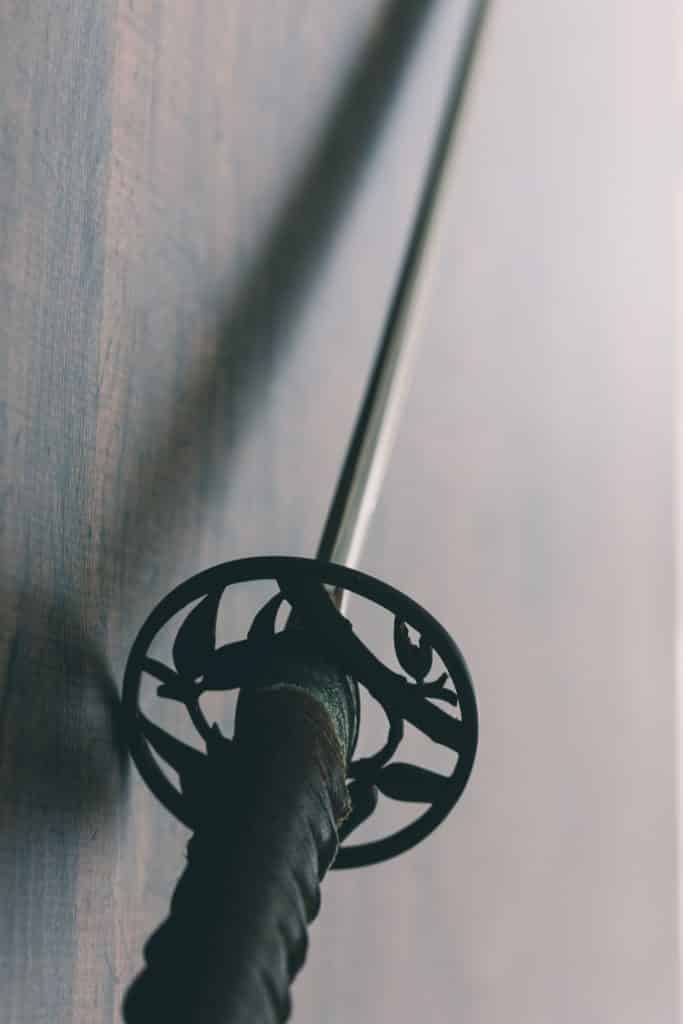 When we talk about Niku sharpening on swords, we’re talking about a very light Niku grade.

Enough to make the edge strong and not break with the first blow, but not too much to lose its cutting ability.

We’re talking about just the right amount of Niku.

Chances are, you will hardly notice the difference between a sword with Niku and one with another type of sharpness. Unless, well, you are a renowned sensei with years of practice in the art of Tameshigiri

In fact, every authentic samurai sword through history had Niku sharpening. The swords of Musashi, Masamune, Hideyoshi, Mitsuhide, and every other famous Japanese warrior/blacksmith you can name had Niku.

The more modern reproductions of the Katanas, which are often used for competitions where the smoothest possible cut is sought, often have that “flat” edge that we associate most with very sharp knives.

While that is the question any reasonable person would ask, it may not be the most appropriate for this situation. It is not so much the cutting ability of the Niku —which is incredibly effective— but the situation in which it is used.

Let us assume that the life of a samurai was hard. Full of fights and battles.

Throughout his life, a samurai’s Katana would face everything. It’ll often collide with other swords, strike armor, and even be the victim of a misaligned blow– Hachiman forgave us.

With this in mind, the ideal was to have a katana with a good combination of strength and sharpness.

The sharp Niku, that flesh that protects the bones, was necessary.

The same is true if you’re looking for a Katana to use on all sorts of objects. Not just Tatami, but bamboo, wood, and other medium-density objects.

In those cases, you will benefit much more from a Niku-edged sword than one with a flat edge.

However, there are situations where you may benefit more from a razor-sharp sword than from one with a Niku blade.

And that’s where we go with the next point.

The Niku blade is the default blade for a samurai sword; as tough as it is deadly. It’s ideal if you’re looking for the traditional experience of owning a Katana.

And, as we saw above, it gives your sword the same edge as those used by the samurai in feudal Japan.

However, there is also another type of edge widely used for samurai swords today.

The Ultra sharpening makes the edge of the blade as sharp as a razor blade. It is able to cut through meat and tatami as easily as you would pass a knife through a stick of butter.

This sharpness is made for precision cutting. It creates samurai swords that are extremely good at cutting light objects. For the same reason, it is often used in competitions or demonstrations of Tameshigiri with soft objects. Those occasions where a hair out of place can be the difference between a professional cut and a mediocre one.

But what about the Tameshigiri with hard objects?

Well, in the next point we cover that.

Which sword edge is best for the Tameshigiri?

This is where you will make your final decision. At the end of the day, it all depends on what kind of items you are willing to cut with your sword.

If you’re looking to cut soft objects, as mentioned above, your best bet is an ultra-sharpened blade. What objects fall into this category? We can find mainly tatami, cardboard, water bottles, animal meat, fabrics, and ropes.

If you get creative, however, you can find many lightweight objects to cut. Try with different types of fruits, ballistic gel, and even European swords! It’s just a joke, never try to hit your sword against another, it will only spoil the edge).

However, there is also the other side of the Tameshigiri. That for the samurai who seek to cut through hard objects like life itself.

What’s the best choice when it comes to cutting harder objects?

If it’s a medium density object, then the choice should always be a Niku sharpening. Not because an Ultra sharp is not perfectly capable of cutting bamboo, but because cutting such objects with a flat blade could ruin the sword.

Within the category of hard objects —ideal for a Niku-sharp sword— are mainly bamboo, makiwara, and wooden sticks.

One of the most interesting variants of this type of Tameshigiri is to cut steel helmets of approximately 2 mm thickness. There is even a video of samurai cutting steel plates out there.

In short, a Niku blade may be just the thing for you if you’re looking for an all-round sword that can cut through all kinds of medium-density objects and can even withstand human failure when it comes to striking.

On the other hand, if you are looking for a samurai sword that can make beautiful cuts like a surgeon with a scalpel, then the Ultra is for you. The edge will be as sharp as a razor blade; capable of cutting so cleanly that the ballistic gel will not know what happened until seconds later. 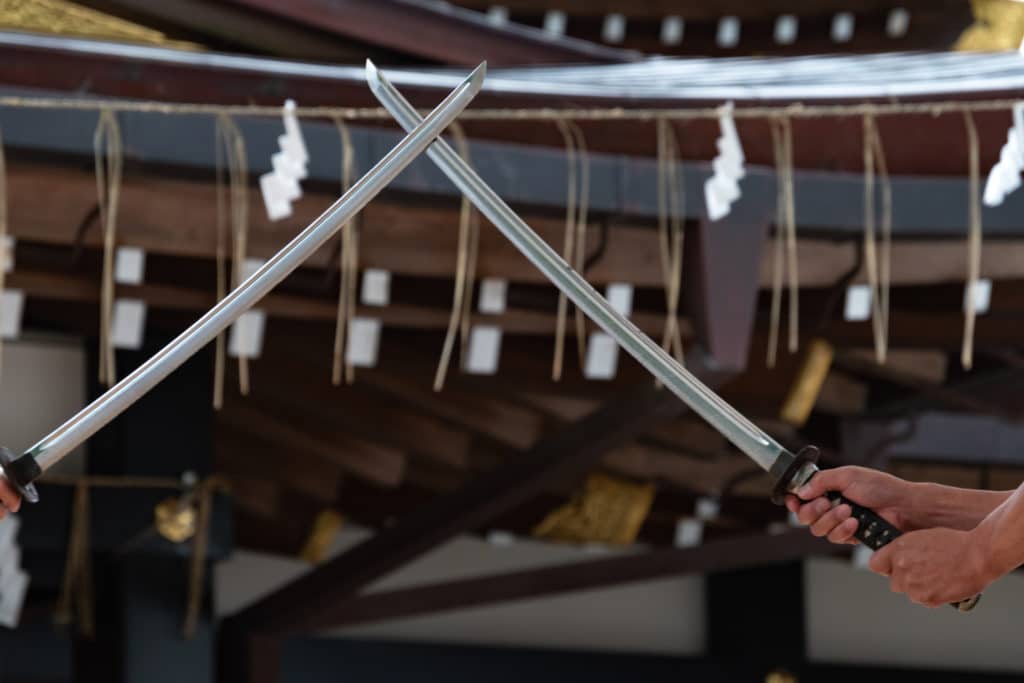 Having to keep an eye on the edge of a sword can be disheartening, we know. Sometimes you just want a sword for its exquisite design, for the quality of its steel, or for its history. And seeing that the sword has a sharpness that you don’t want can put you in a difficult position– design or edge?.

At Katanasforsale, we believe the samurai has the final say. That is why when you buy any of our swords we ask you if you want a Niku or an Ultra blade.