The Samurai Bow and its History

The Yumi was a vital weapon of the Samurai during Japan’s feudal period. It was able to accurately and efficiently shoot Japanese arrows called Ya. The term means bow in Japanese but in English, it refers to the classic Japanese asymmetrical bow. This includes the much longer Daikyu and the shorter Hankyu. Both of which were utilized for practicing Japanese archery, Kyudo, and Kyujutsu.

History and Evolution of the Yumi

The Yumi is probably one of the most interesting and unique weapons that the ancient Samurai warriors utilized. However, its history may be even more interesting and older than expected. Just like in a lot of countries, bows were the primary tools for hunting even before they were utilized as weapons.

Archeologists retrieved unearthed stone arrowheads suggesting that bows and arrows were used in Japan as far back as 10,000 BCE. With that, it was proven to be utilized during the Yayoi period. This was the time when wars started becoming widespread and frequent.

Early bows were simple in appearance; they were referred to as Maruki. These are crafted from wood such as sandalwood, atalpa, zelkova, mulberry, or yew. These are wrapped or lacquered with bark thongs to further improve its durability and withstand Japan’s climate. The Maruki were also considered as straight bows. This specific type was weaker than the much later designs. However, it was also easy to draw, was effective for short distances, as well as fast-paced engagement. This is where the idea of Yabusame came from. In fact, these types of bows are still being used. Some uses today include ceremonial and competitive archery.

What is Hama Yumi?

There are numerous mystical and religious stories about pieces such as the Hama Yumi. Its grip, as noted in the Book of Wei from the 3rd century, was asymmetrical even before the creation of the horse archery style of combat. 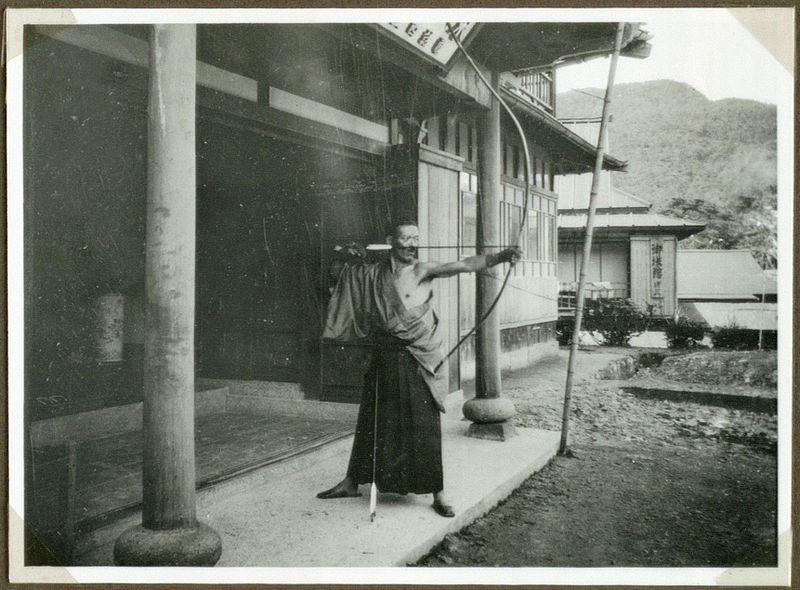 Composite recurve bows similar to the Mongols were known in Japan since the 9th century. However, sinew and horn were quite rare in the country. Cattle were not common and handling leather or slaughtering animals was a taboo in Buddhist societies. With that, the Japanese made use of materials that they were abundant of bamboo and wood.

In the 10th century, the very first composite bows have appeared. The first clear and genuine evidence of this type can be found within the poem by Minamoto no Yorimasa. These were the Fusetake which featured a single laminated bamboo strip. This was to acquire enough power necessary for war bows to maintain a cross-section with reasonable proportions. During this period, the familiar construction of the Waikyuu began to appear.

Later during the Heian era, these types of weapons further enhanced and developed to become more efficient. Around the 12th and 13th centuries, there was an additional bamboo laminate on the weapon’s inside face. Thus, creating the Sammai Uchi Yumi. This increased the bow’s power even more.

How was the Transition from Straight to Recurve Bows?

There is no clear date as to when the bows shifted from straight to the recurved type. Though there are some historians claiming that only after the Mongol invasion did the Yumi shift to a recurve piece. However, it is still difficult to tell based on those depictions and claims. With that, it is still possible that the change may have occurred even before the invasion.

When it comes to the transition of these bows, they were steam-bent and given arc shapes. These were strung against their curve which is an innovation that further enhanced its power. At the onset of the 14th century, the bow developed into a recurved weapon. Yet during the 15th century, there were additional two bamboo slats on its sides so its entire core was fully encased. This development created the Shihouchiku Yumi. 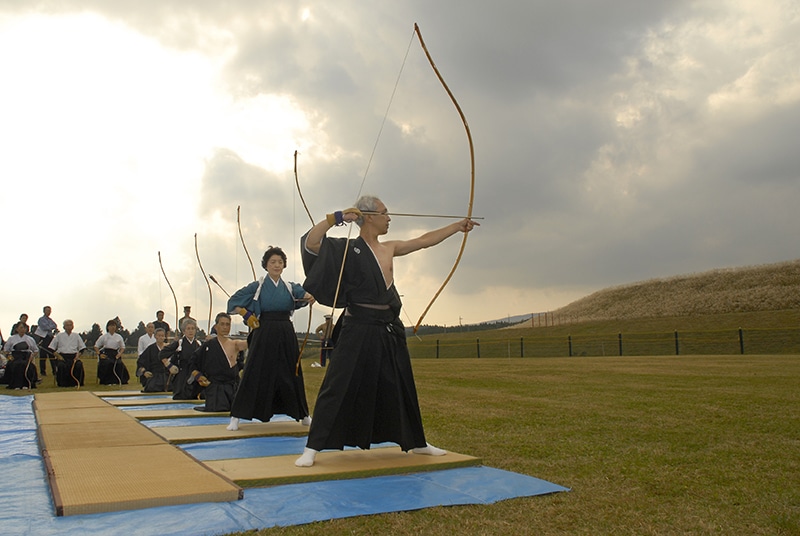 What is Higo Yumi?

The last step for improving the bow was in the 17th century during the Edo period. As a result, was the development of the Higo Yumi. Its core features three to five bamboo slats as well as extra bamboo facings that are laminated on its front and back edges. There are also laminated strips of wood to the sides.

When was the Decline of Yumi?

As a weapon of war, the Yumi started its decline after the Portuguese arrived in the year 1543. They brought a set of firearms with them in the form of a matchlock. The Japanese soon began creating their own version of the firearm which they called the Tanegashima. Eventually, this and the yari became the preferred weapons over the Yumi.

The Yumi, as a weapon, was utilized together with the Tanegashima. This combination was only used for a certain period due to its longer reach and accuracy. This was also due to Yumi having a firing rate of 30 to 40 times faster.

The Tanegashima did not require the user to undergo extensive training to be able to use this. It was completely different from the Yumi since the bow required a lot of training for proper usage. With that, the Tanegashima allowed Oda Nobunaga’s army to readily wipe out a traditional archer cavalry during a single battle in the year 1575.

All Kyudo archers must hold their bows with their left while drawing the string requiring them to use their right hand. This was necessary so that every archer faced the higher position or Kamiza when shooting. Generally, there are two primary techniques to properly shoot a bow.

The Ogasawara Ryu is a type of technique that is connected to horse archery. It allows the archer to use the bow above their head to clear their steed. He or she would move their hands away while the weapon was carefully set down. This will end with the archer’s left arms straight while their right hand is close to the right ear. However, it is still unclear if the method, Uchiokoshi, where the bow is lifted above the user’s head, was utilized in the earlier periods. It may have been a late Edo period method, allowing the kimono’s right sleeve to fall down while shooting the bow. 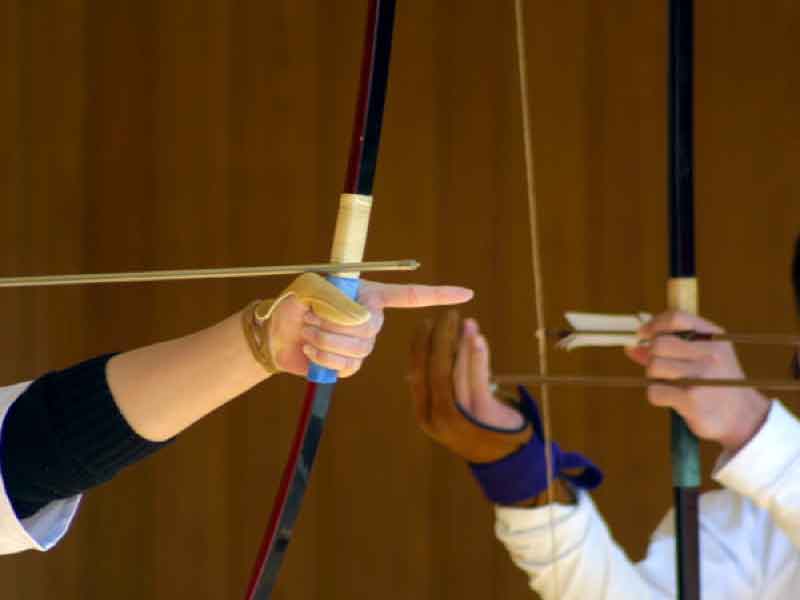 The alternative method by foot was somewhat similar to the West’s form of archery. This links with the Heiki Ryu – where the draw starts holding the bow and positioned perpendicular to the ground. To release this, the archer’s fingers supporting the thumb must relax. This allows the string to slowly slip off, letting it rotate in hand.

How was the Yumi Constructed?

Originally known as a staff bow – which was crafted from a single piece of wood – the Yumi became a powerful and very efficient longbow. This was when Chinese first introduced lamination and applied to the Yumi in the 9th Century. The process of lamination is adhering various types of woods together using glue, then making use of other strengthening materials to increase its endurance.

A typical Yumi measures around 7 and 9 feet tall. Although these are categorized as longbows, it does not look nor function like their European counterparts. The construction Yumi was over a few centuries. The development of its design from a staff bow to having multiple laminates. The wood utilized for the weapon’s core was usually the Azusa or Keyak. As for the laminate, it is made of bamboo, hardened by fire.

The strings were from natural fibers and usually made of hemp. The strings can be laminated for better protection.

Kyujutsu is the art of the bow. It is completely different from modern Kyudo. However, both of these required a full understanding of the different methods for use. This allowed the user to properly wield the Yumi and Ya. The different levels of Japanese archery are the following: Tokeki, the Kenteki, and the Zaiteki.

Tokeki, is present in all forms of archery and styles. This is the basics where the user must execute accuracy when hitting the target. In modern Kyudo, it is a way of recreational shooting. Kenteki is the second level wherein the arrow pierces the target. It is primarily the focus of the mind and body to acquire a smooth yet rigorous shooting style.

This came from Hekei Danjo’s technique around the 1400s, namely “hi, ken, chu” or as translated, “fly, pierce, and center”. It is the specific level that Kyujutsu wants to achieve. The third level is the Zaiteki which holds the true meaning of Kyudo. The mind, body, and the bow come together as one, and aiming for the target is no longer the primary goal. It is the art of shooting that matters. Kyudo is possibly the purest of all the known martial arts. It is vital to practice it everyday since it helps improve physical, spiritual, moral and spiritual development. This is also usually carried out with Zen.