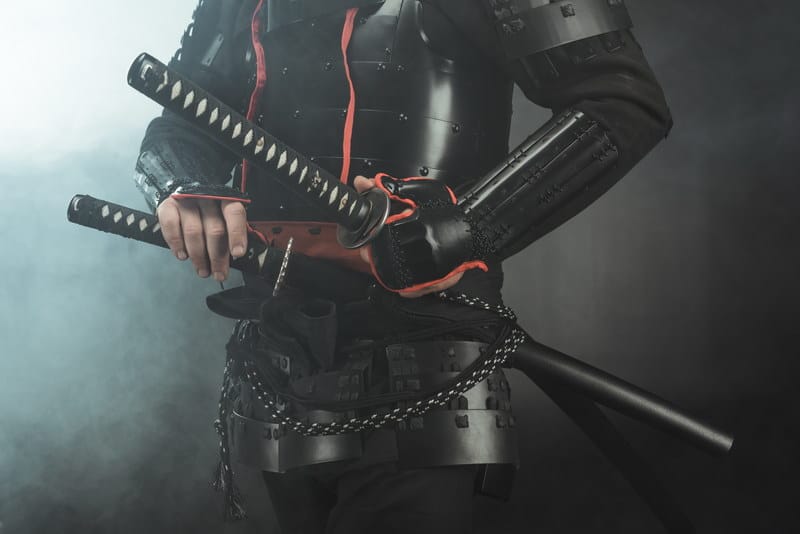 Do you know the importance of Daisho? The Samurai wore the Katana as their life swords. That is true. But what most didn’t know is that Samurai don’t just have one sword with them. There would either be two or sometimes three swords.

Daisho is the set of swords that these warriors wield. Once born, each Japanese sword is believed to possess a destiny. It must not break or bend. It must cut like a knife through butter.

When Samurai warriors dawn their swords, they require them to look exquisite. A sword not only has the utility of a weapon but also made of fine possession. The pursuit of these twin virtues gives the Japanese swords unique and lustrous history.

Daisho literally means big and small. The Katana is the big sword or Daito. And the Wakizashi or Tanto is the small one or Shoto. Sometimes, a Samurai could have all three with him. They only call them Daisho when two swords match. They must have the same Koshirae or ornate mountings. This pertains to the fitting, design, and sometimes materials. 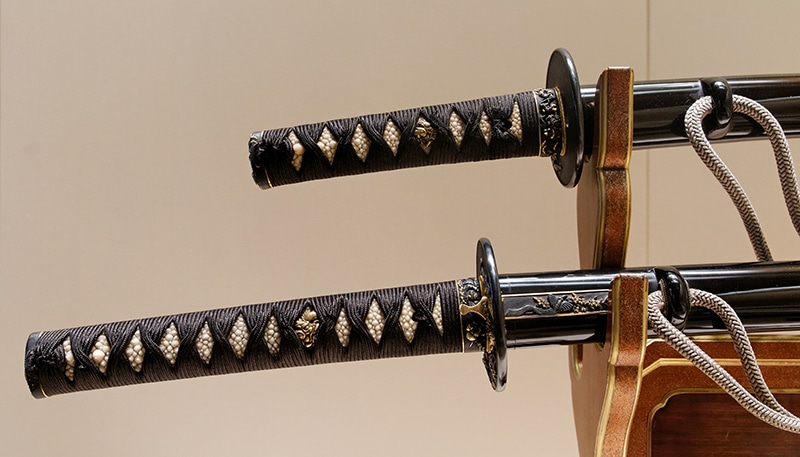 It is not necessary that the same swordsmith make a Daisho. Though most often it is. They create and design the Katana first. If it is needed, they also make a Wakizashi or Tanto. Sometimes, a Samurai can have his second blade made by a different smith.

Daisho came out towards the end of the Muromachi period. At this period, one Daimyo sends his Samurai often to other palaces or Daimyo houses. When one Samurai enters a palace or house, they require them to leave the Katana outside. They can only bring in the Shoto.

One theory is that the curved blade derived from the edged weapons used by the Emishi, an ethnic group in northeastern Honshū. The claim was that this group use curved blades because they found it is effective from the saddle. They soon argued that the mounted warriors were the first Samurai.

With less influence from Chinese and with the flowering Japanese sword-making techniques, a demand was made. The demand was to create a weapon that was better in slashing than thrusting. It gave birth to the Japanese sword. 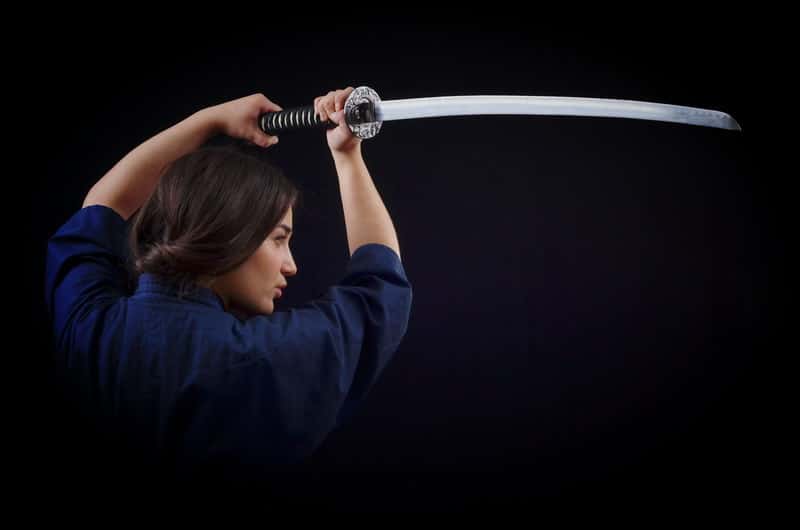 They called these early curved swords Tachi. It was slung from the belt with the cutting edge downwards. Only a few Tachi survived. Tachi is the start in the idea of the Katana.

It was during the 12th century when the word Katana came out. It was a term that became popular to differentiate its style and length from a traditional Tachi. 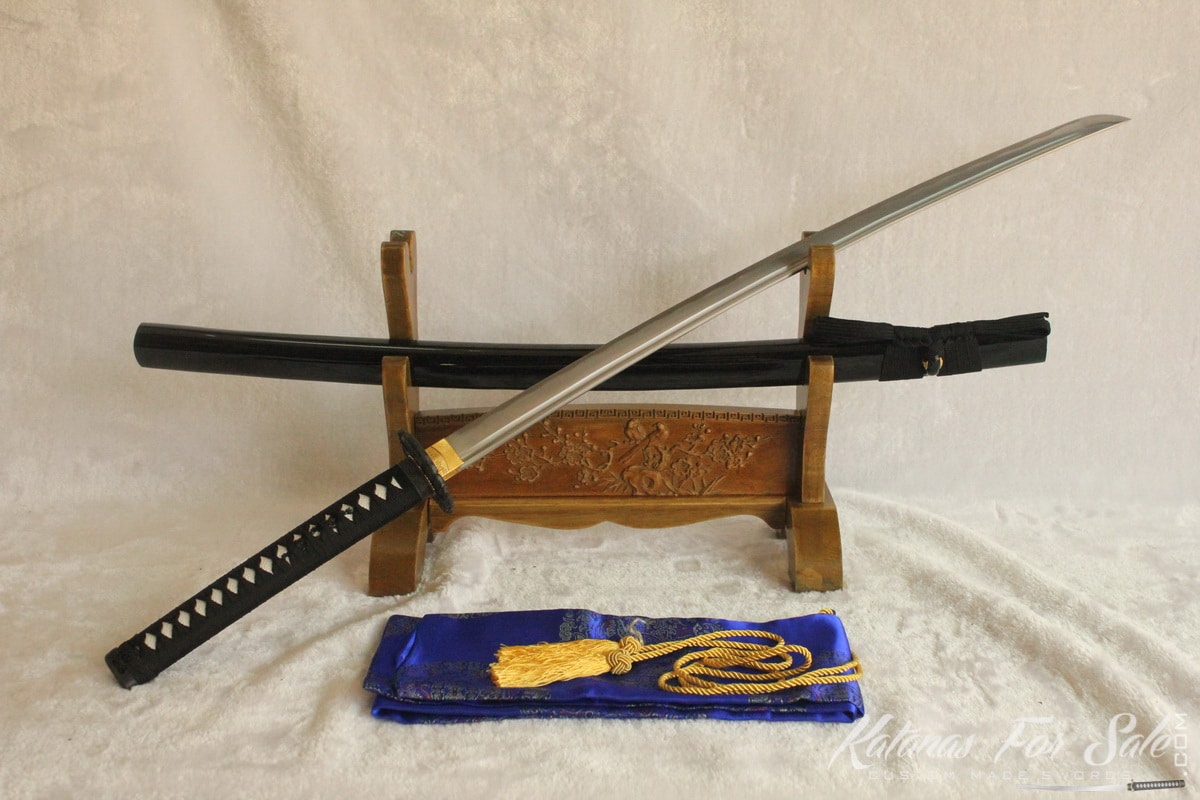 Some of the best swords of all time are produced in the Far East. For over a thousand years, one blade dominates at the battlefields of Japan. It is no other than the Katana.

It became famous because warriors could tuck them on their belts and quickly draw them out when needed. One can use the Katana while riding a horse, on foot, or fighting on the battlefield. One can use his one or two hands to wield the sword.

The Katana is among the few swords wielded as a weapon and a shield. With sturdy inner core steel, it can absorb the shock when used as a shield. A first draw could only mean to shield a strike or make the first blow. Due to its resilience, it became the primary sidearm of the Japanese warriors. 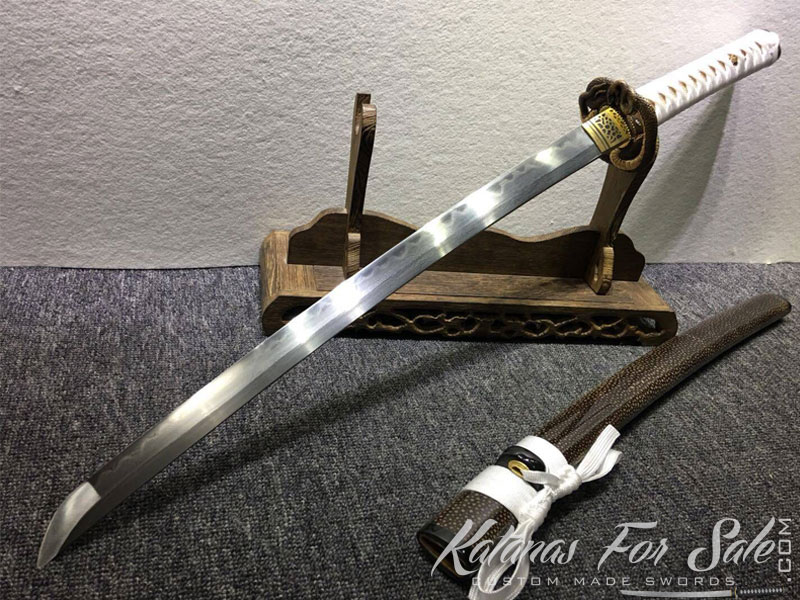 Many say that the Wakizashi is simply a short version of the Katana. Wakizashi was a word short for the phrase Wakizashi no Katana, which means, swords held at one’s side. This applies to all sizes and lengths of swords. It was on the Edo period that swords were categorised. Soon, a Wakizashi must be between 30.3 cm to 60.6 cm.

Most used Wakizashi for indoor fighting, beheading, and Seppuku. Soon Samurai always had a second blade with them. Many also believed that the Wakizashi is drawn when a Samurai must draw a sword fast. The shorter sword gives the warrior a shorter time of getting it out from its sheath.

The Wakizashi is made no differently from a Katana. The process is the same. Only the handle and the ornaments are different. The Wakizashi became a standard sword among Samurai at a time. They only allow Samurai to wear two swords. It became a status indicator. 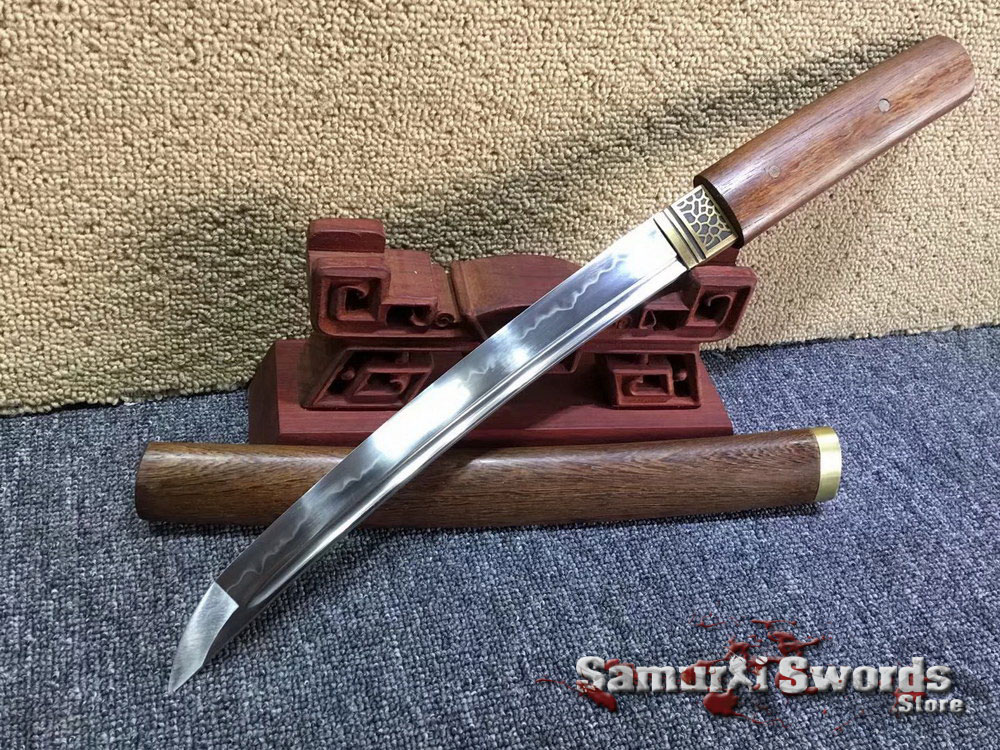 This is the smallest blade among the three in a set of Daisho. Tanto technically means dagger. They usually used it for close-quarter combat. This means that the warrior lost his Katana. Some believed that when the warriors are armoured, they prefer the Tanto as a secondary sword. Logically, a second sword is an additional weight.

Tanto blades come in different sizes and shapes. But it is commonly less than 30 cm long. It is an excellent secondary or emergency blade to have. No wonder they often choose the blade for Seppuku, the ritual suicide.

In Japanese culture, Tanto are sometimes given to newborn babies. It serves as Mamori-gatana, meaning a protective talisman. They serve as an early gift for protection. In the end, it may also become the blade that ends their life.

How to Wear the Daisho

For the Samurai, Daisho was their badge of rank. It was tactical imperative that they wore two swords. And it all depends on the Samurai’s preference.

So some Samurai wore their swords. They either wear a Tanto or Wakizashi. Surely, they wear a Katana. The Tanto or Wakizashi would go in the Obi or belt between the first and second layers. The first being the closest to the Kimono of the Obi. The Tsuba sits in front of the navel or just to the right of it.

Now it depends on the Samurai if the first sword is Tanto or Wakizashi. But the short and long swords must be a match. They may have a slightly different design, but they make them match. They designed the blades to go together. Now, this is the correct Daisho. But remember, not every Samurai wore a Daisho.

The Katana or longsword goes between the second or third folds of the Obi. This was done for several reasons. One of them is so that the handles won’t rub each other. The short sword is worn about 45 degrees, while the long sword is parallel to the body.

Another reason is the way to access each sword. The swords place in the Obi allows the Samurai to access both swords easier. The Katana can be drawn fast and easy. This stands the same for the second sword, too. It allows easy drawing while the Samurai holds the Katana.

Another thing worn by a Samurai inserted into his Obi is a fan. It usually has iron ribs, so it serves as an extra weapon. Not only can the fan help on hot weathers but also sometimes in fighting.

How Japan Makes the Swords

Since the legendary Katana is born, furnaces could reduce iron to a sand-like form. The iron is incredibly pure, and it forms unique steel when combined with carbon. They call it Tamahagane.

For those who do the process, they say you could see from the color of the flame if it has turned to Tamahagane. The furnace men tend the fire day and night until the process is complete. The carbon provides shock absorption so the sword can be useful in fighting. 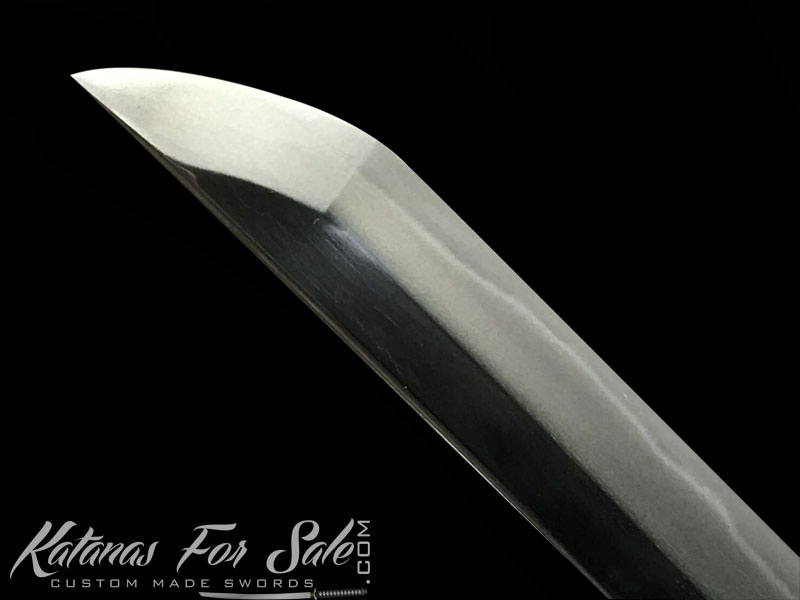 The Samurai, the warrior and gentlemen of Japan, was defined by the two swords that they wear. Almost no one else in Japanese society was allowed to otherwise. And so the wearing of a pair of sword became a way of advertising that one is a Samurai. It presented a status.

After three days, they draw the special Tamahagane from the furnace. The swordsmith leads a spiritual way of life. He prays to the Buddha for the perfect sword. The forge is regarded as sacred science.

In all countries with a Marshall tradition, these swords elevate to a symbol of power and justice. But in Japan, it’s more than this. A Samurai achieves his spiritual development through the way of the sword.

In the hammering process, they cover the Tamahagane with a holy script. Then they add clay and ash to limit the amount of air in the process. The hammering welds the pieces and drives out impurities. The Katana is a block of steel yet. They hammer and fold it several times. A dozen fold creates about 5000 layers of steel.

Wakizashi Sword and Its History

In most cultures, the swordsmith has an important role. He’s the man who is putting into the sword more than just the pure qualities. He is imbuing in something of himself. He will sign it with pride. So much so that good old swordsmith can’t be counterfeited.

In Japanese society, this takes a very extreme form. The smith would abstain from drunkenness, from sex, and would almost become a monk for the period of forging the sword. Then the sword will have in it all sorts of qualities, particularly the famous Japanese swordsmiths. 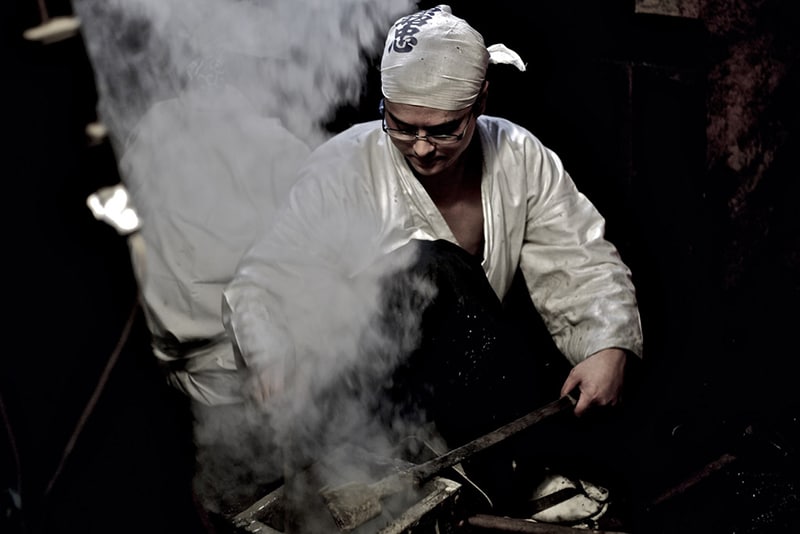 Samurai warriors were an elite class. Their particular Buddhist belief meant they had no fear of killing men or dying. Korea and China gained riches from the warlords of Medieval Japan. The Katana sword brought wealth to the blade of distinction.

In a Japanese sword, you will see a wavy curve line appear to its edge. It reflects that fact that is a layer and layer of steel heated and beaten repeatedly. It gives an extraordinary strength and durability to the blade but also sharpness at its cutting edge.

Two kinds of steel make the Katana. Hard on the outside but with a softer core to give toughness and flexibility. In the middle ages, they use Katana in executions. This means the blade has to be really sharp. It must cut it just one swing. They tested the blade mostly on the corpses of criminals. They graded the swords according to their cutting power.

One of the final stages is the polishing process. The task is to sharpen the sword and to reveal the structures of grain built into the sword during the making process. Eventually, the beauty of the metal shines through. It shows the hard and soft layers.

So which is superior? The Japanese Katana or the Medieval broadsword from the same period? The Katana is light, and it enables the swordsmen to move quickly. The broadsword is heavier but just as sharp. By the time the Katana has made three cuts, broadsword will only cut once.

The sword may be made today, but it embodies centuries of knowledge. Although the Samurai was the most powerful, Europe was entering the age of enlightenment. Both swords served their purpose. Both created a rich history of war and swordmaking.

A Samurai is always close to his swords. At night, it remained by his bed. It is a sign of his authority and only death will part him from it. Today, antique Daisho sets are in museums and collections. Those who have their own Daisho use them for training, martial arts or house decors. They no longer linger the streets with men swinging them around.

In Tokyo alone, there are about 200 shops selling antique swords or custom made ones. One can definitely visit the Japanese Sword Museum for a start. Some go to Japan and visit actual last places creating swords the traditional way. These swords may be made today but the process and ritual are the same hundreds of years ago. They make Daisho upon request with either a set of two or three.