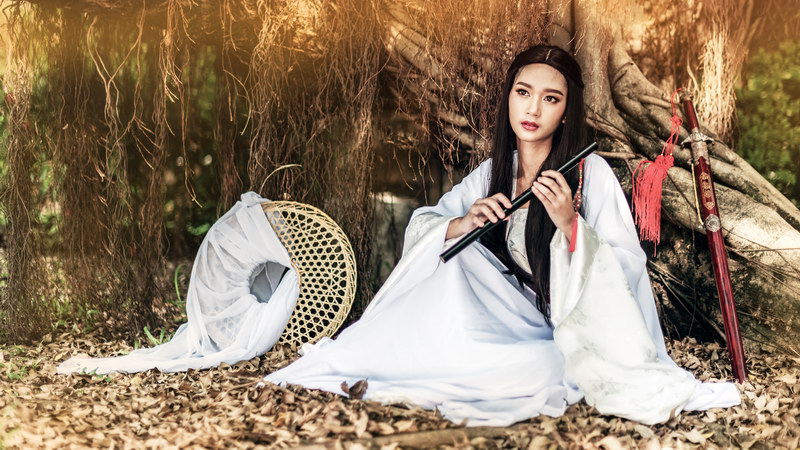 Around six thousand years ago, bronze objects first appeared in Ancient China. This was the time when the Stone Age had ended, marking the start of the Metal Age.

Upon entering the Bronze Age, a lot of people started adding tin and lead to create a bronze alloy. This caused the decline of stone weapons. In 476 to 221 BCE, during the Warring States period, there were accounts about the casting of weapons. 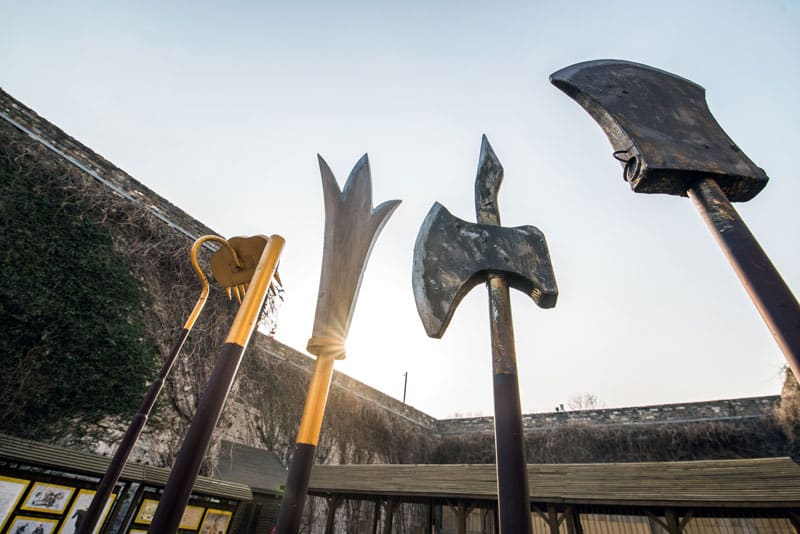 The objects made of three various metals had impressive durability. In fact, the technique of combining various materials was popular during this period.

Here are the different weapons used in China during ancient history:

What was the Most Used Weapon of the Ancient Chinese Warriors?

The Qiang is a spear, and it is the most used among long Chinese weapons. Centuries of research and practice allowed spearmen to better their skills. This made the defense against spears a bit of a challenge. With that, Chinese warriors sought for better defense against the spear.

For the ancient spearheads, they come in various shapes. However, the creators of weapons focused on spear’s staff than its head. 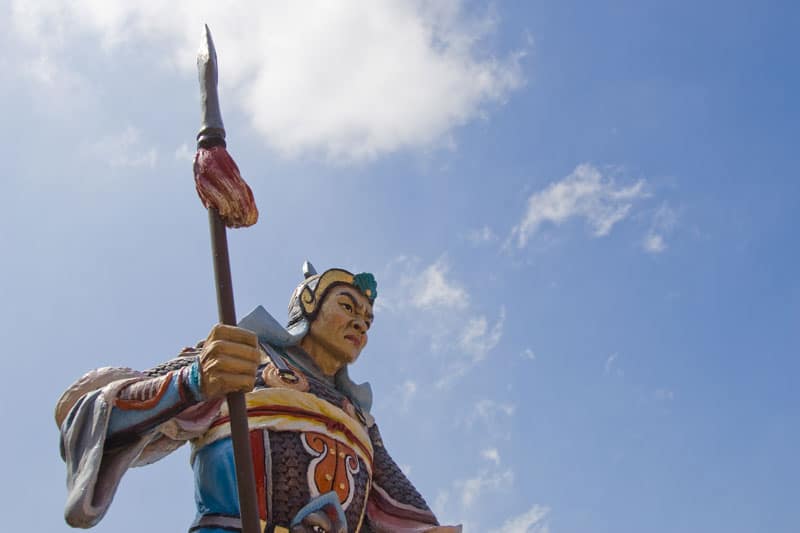 The Ge or dagger ax is one of the popular long weapons used by Chinese. It consisted of a blade that resembled the shape of a dagger. It had a perpendicular wooden shaft where the blade was usually mounted.

This was the first of many Chinese weapons that did not have dual purposes. Unlike the bow and arrow, which was for both hunting and combat, the Ge was only used for battles. It also did not have any function in agriculture. 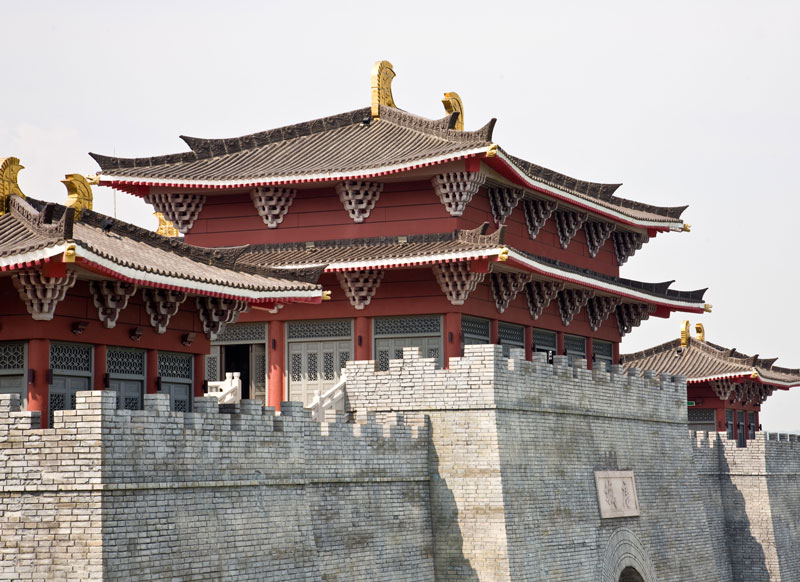 In the beginning, people tied a stone on at the end of a staff. When they started using bronze, they created a lot of beautiful heads for the Ge. Others featured blades made of jade, which were for ceremonial use. One type of Ge had a divided two-part head that consisted of straight and scythe-like blades.

A lot of excavated Ge were usually found in the tombs of aristocrats. Most of them were ceremonial jade weapons. The ceremonial Chinese weapons were all placed in the coffins. Most likely, these served as symbols of power and authority.

During the ancient period, soldiers equipped long weapons and fought from war wagons. This was when the Ge became useful. Its use was widespread from the Shang dynasty until the Han dynasty. It became obsolete after the Three Kingdoms period in 220 to 265 AD.

The Double-Edged Sword of the Chinese 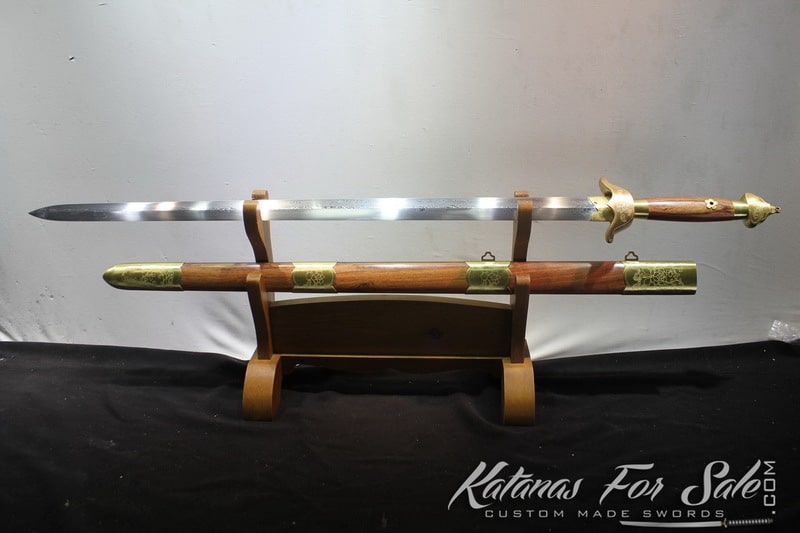 The Jian was the first and most common sword of ancient China. It featured a straight blade with a double edge. This wasn’t a simple weapon, but it represented the classic values of the Chinese culture.

In the Spring & Autumn Period and the Warring States era, quality bronze Jian appeared. People respected and treated these as holy weapons.

The sword of Goujian was the most famous bronze sword. This was a Jian that Goujian, the king of Yue. He ruled during the Spring and Autumn period and was the rival of Fuchai.

The Sword of Goujian had a length of 1.82 feet and a width of 1.97 inches. It featured black ornamental patterns. This also had inscriptions stating “made by Goujian, the King of Yue”. When found, it was still in its black lacquered wooden scabbard with no corrosion. When one researcher touched the sword’s edge, it cut his finger. 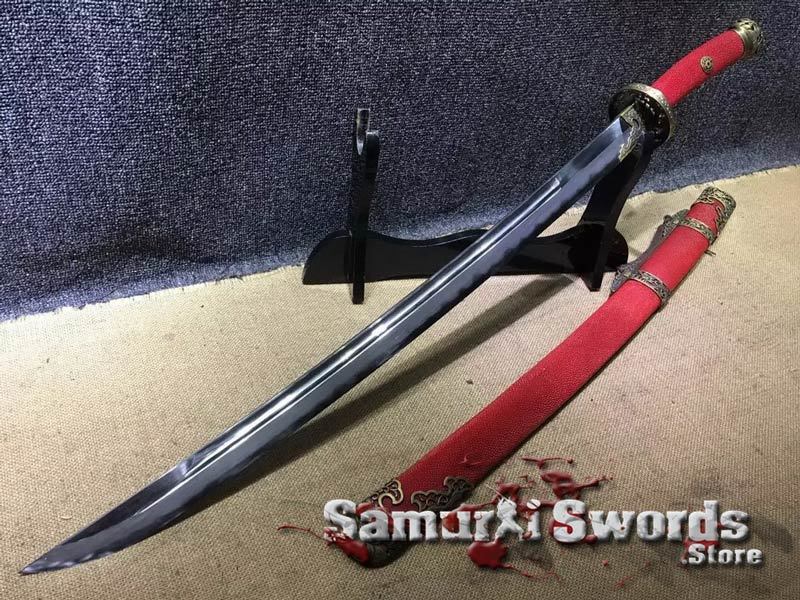 The Dao is another Chinese sword that features a blade with a single edge. Its primary use was for chopping and slashing. The most common form of this sword was the Chinese sabre or broadsword which had wider blades. In China, the Dao was one of the four traditional weapons together with the staff, Jian, and Qiang.

The earliest Dao was from the Bronze Age during China’s Shang Dynasty. This was the Zhibeidao or straight-backed knife. It featured a straight blade with a single edge and a slight curvature.

The original Dao were bronze, but those from the later periods were all made of steel or iron. In the late Warring States period, metallurgical knowledge became advanced. This was to control carbon content. 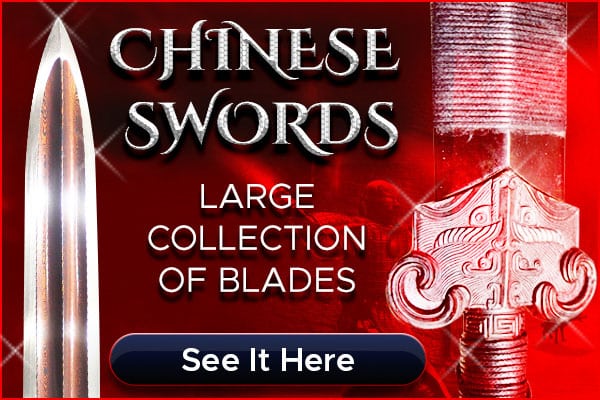 The Dao was a once less common weapon for the military, unlike the Jian. However, its use became more widespread among the cavalry. This was because it was more durable as a chopping weapon and it was easier to use. Some claim that it takes a week to master the Dao, a month for the Qiang, and a year for the Jian.

In the following years, the infantry began using the Dao as their standard weapon. This replaced the Jian. The Dao of the late Han dynasty featured round grips and ring-shaped pommels. The range of its length was between 85 and 114 centimeters. Chinese warriors used this together with rectangular shields.

When the period of the Three Kingdoms had ended, the Dao was close to completely replacing the Jian. As a result, the Jian became known as a self-defense weapon. Its use became common among the aristocratic scholars. They wore the sword as part of their court dress. 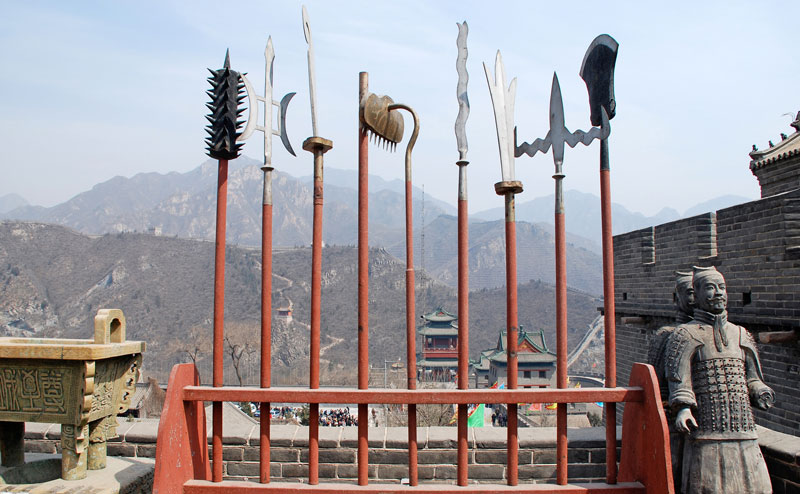 Among other Chinese weapon that the warriors of ancient China used for over 3,000 years was the Ji or the halberd. They began using this as early as the Shang dynasty until the Qing dynasty had ended. Today, practitioners of Chinese martial arts still use the Ji for training.

The Ji featured a bronze or steel tip. This was a part mounted on a long shaft’s end and attached next to this was a curved blade. With these, the weapon became useful for slashing and stabbing. The shaft of the Ji had two sizes: the one used in chariots was longer compared to the ones for cavalry and infantry.

The Ji fell out of use in war during the Western Han Dynasty. The Qiang replaced this during the Northern and Southern Dynasties. Later, ceremonial guards carried this and it also became a martial arts weapon.

Initially, the Ji was a hybrid between the Ge and the Qiang. Its use was common among the infantry, though the cavalry and charioteers also used this.

Another variant of this Chinese polearm is the double Ji. This was when two curved blades were set in place on opposite sides of the tip. 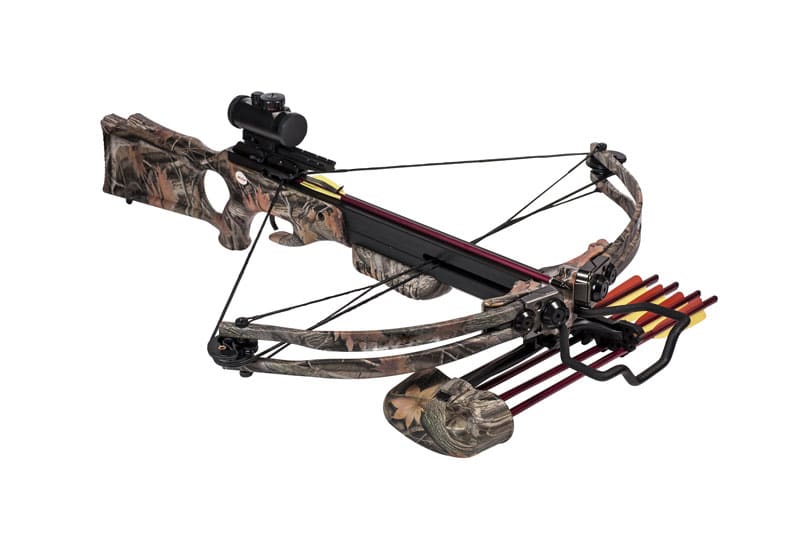 The crossbow first appeared in ancient China during the Warring States period. It developed into a weapon that was more accurate and powerful. Yet, some of these came in lighter versions that could be immediately fired with one hand.

There were other crossbows that could fire numerous arrows. But for something more powerful, some of these evolved into heavier artillery models. These crossbows were often mounted on movable and rotating bases.

It was a crucial factor in the victory of ancient Chinese states, especially with foreign military forces. These were also important in building the dominance of the Sung and Han empires.

This crossbow with a short wooden stock and horizontal bow fired one or many arrows. These were usually created with bronze heads and wooden shafts. The arrows also had wooden, feathered, or paper vanes for a stable trajectory.

Earlier arrowheads featured two blades. However, these advanced over time, so three blades became the standard. The crossbow began matching the amount of vanes, boosting its flight’s accuracy. Its firing and trigger device was made from metal which was often bronze.

These ancient Chinese crossbows were first created by Ch’in Shih. He was from the Chu state and was around during the 6th century BCE.

Early samples of the weapon were pieces crafted only from wood. Yet these have long vanished from archaeological records. In history, the very first documented use of the crossbows in Chinese warfare was in 341 BCE. This was during the Battle of Ma Ling between the Wei and Qi states.

Sun Bin, the leader of Qi, used the crossbows effectively when he was able to route the enemy. The armies from the East Zhou Dynasty were popular for their elite crossbow units. Soon, military treatises accepted that skilled crossbowmen were worth 100 foot soldiers 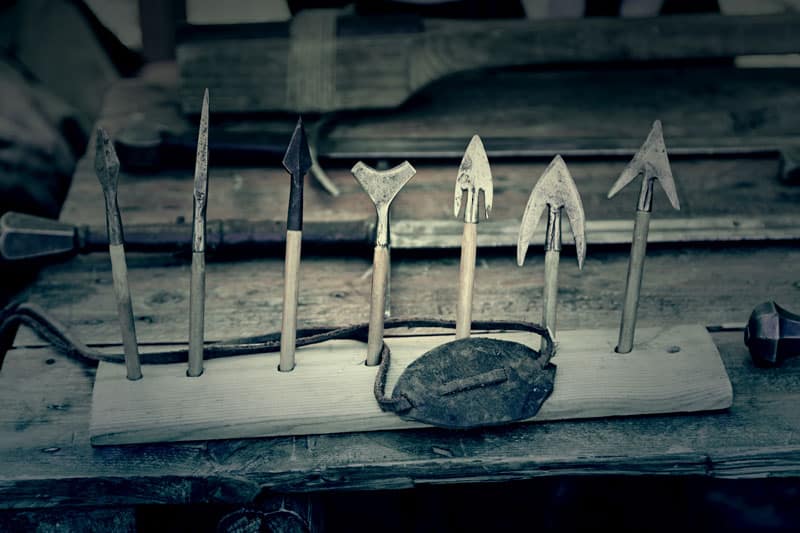 What is the Repeating Crossbow?

During the Song Dynasty, weapons developed and upgraded in design. It was in this period that saw the appearance of the repeating crossbow.

Aside from repeating crossbow, it was a weapon called the Zhuge crossbow. This is because it was a weapon linked to Zhuge Liang, a prominent strategist of the Three Kingdoms era.

This weapon was capable of shooting bolts every few seconds. However, its accuracy diminished.

Other improvements in the design included better firing power and stirrups. It was necessary for cocking the crossbow. Another enhancement was the addition of sights for better accuracy. 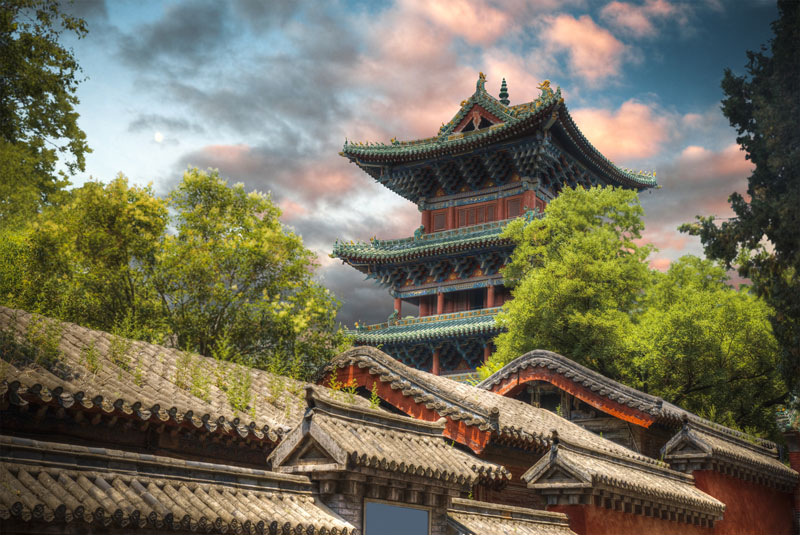 The repeating crossbow remained in use until the later times of the Qing Dynasty. This weapon combined the actions and functions of stringing the bow. After, it is setting the bolt, then shooting right into a single-handed movement. This allows for a higher firing rate than regular crossbows.

A top-mounted magazine with a reserve of bolts feeds the repeating crossbow. Its mechanism functioned by shifting a lever forward then backward.

Based on the history of the Wu Yue War, the repeating crossbow was a weapon created in the Warring States period. It was a piece produced by a man named Qin from the State of Chu.

These weapons were all excavated from a burial site in Chu. In addition, the weapons dated back to the 4th century BC in the years 475 to 220 BC.

Compared to the earlier repeating crossbows, the ancient pieces made use of a pistol grip. It also featured a rear-pulling system that required the user to do a couple of things to make it work. They had to push the rear lever up then down, as well as back and forth. 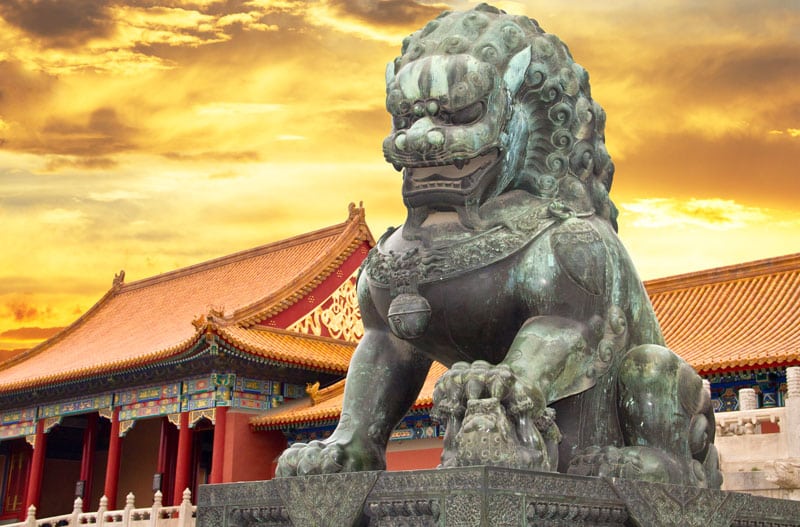 Was an Ax an Ancient Chinese Weapon?

The Fu was an ax and wasn’t a common weapon in the Chinese military. However, it was then utilized by the security forces of that time. They functioned as guards to the kings, nobles, emperors, generals, or nobles. This symbolized the prestige and power of these guard’s high-ranked employer.

The Fu was often built using two varying materials. Its handle was usually made from wood, while its blade was a piece made from iron. It was a weapon for attacking or threatening those who trespassed private property.

At first, this weapon was for cutting wood. But soon, it was something adapted for ancient Chinese weapons used in the military. 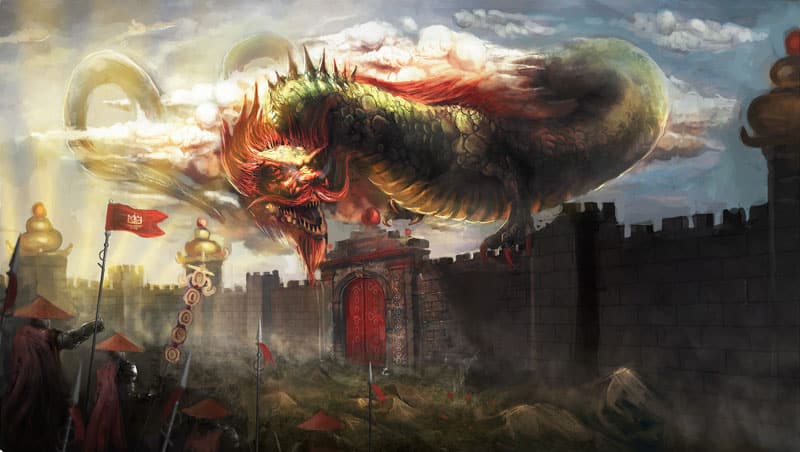 The Gun is a long staff from ancient China used for Chinese martial arts. It is among the four primary weapons of the country, together with the Qiang, Jian, and the Dao. The Gun is a weapon referred to as “The Grandfather of all the Weapons”.

This weapon from ancient China comes with a thick end for its base. For the part close to its tip, it becomes much thinner. The cut of the Gun should be around the same height as the wielder. If not, it should be around 6 feet in height.

Aside from the regular Gun, flail-like pieces with 2 or 3 sections were available. Plus, there were heavier and non-tapered variants as well.