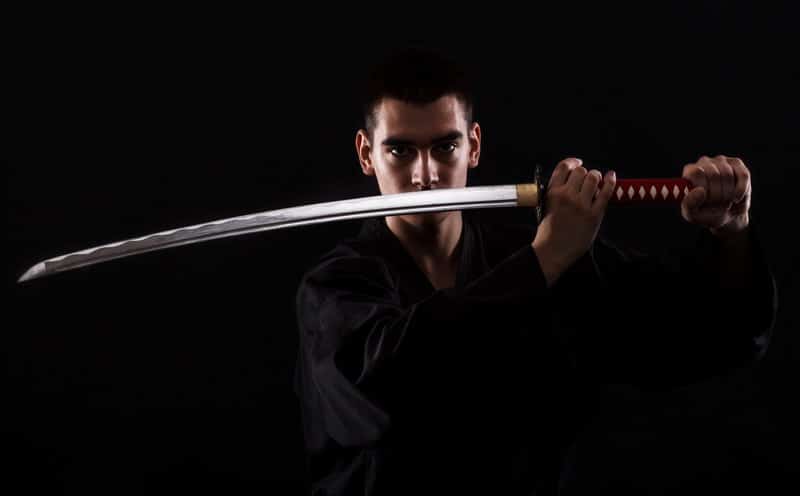 In the warring period of Japan when Samurai was prevalent, they had an honorary title “Kensei” or “Sword Saint”. A Samurai who has legendary skills in swordsmanship receives this title.

In any martial arts of any time, it is reasonable to aim for the highest rank. Many tournaments were set up, and many joins in to prove oneself as the number one.

Many of the warriors given the title Kensei were masters or founders of their own sword style. However, many believed that no more than one person could be a Kensei at any given time.

One particular Kensei that stood out from the others was Tsukahara Bokuden. He was a renowned swordsman during the early Sengoku Period (15th century). He was popular to have fought famous martial arts experts that Japan had to offer and won.

Who was the famous Tsukahara Bokuden? 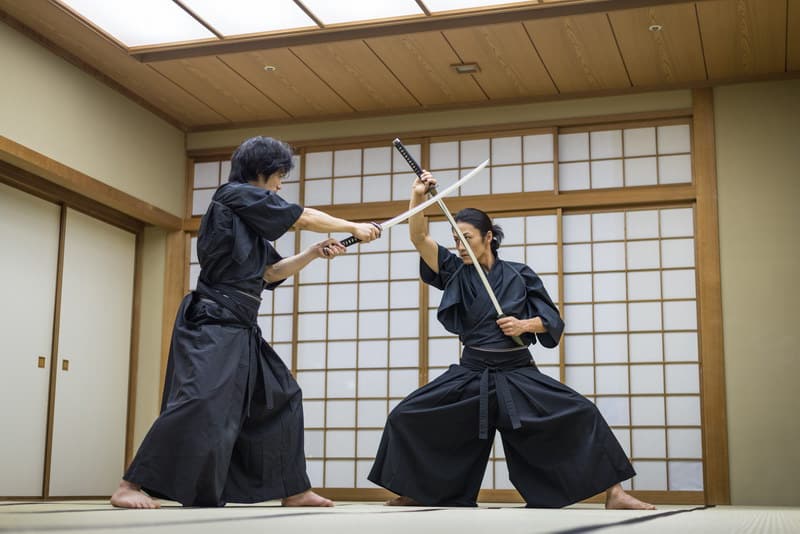 Tsukahara Bokuden was born from a Shinto Priest and learned how to wield a sword at an early age. Tsukahara Yasumuto, a master of a Dojo, later on, adopted him. Yasumoto continued teaching him the Tenshin Shoden Katori Shinto-Ryu.

When he was 16, to master his skill, he engaged in Kaikoku Shugyo or “a warrior’s expedition throughout the land to refine one’s skill.” He left his noble and wealthy living for the sake of his martial arts, challenging renowned swordsmen and systematizing his own art.

How did Tsukahara Bokuden Become Famous in Japan? 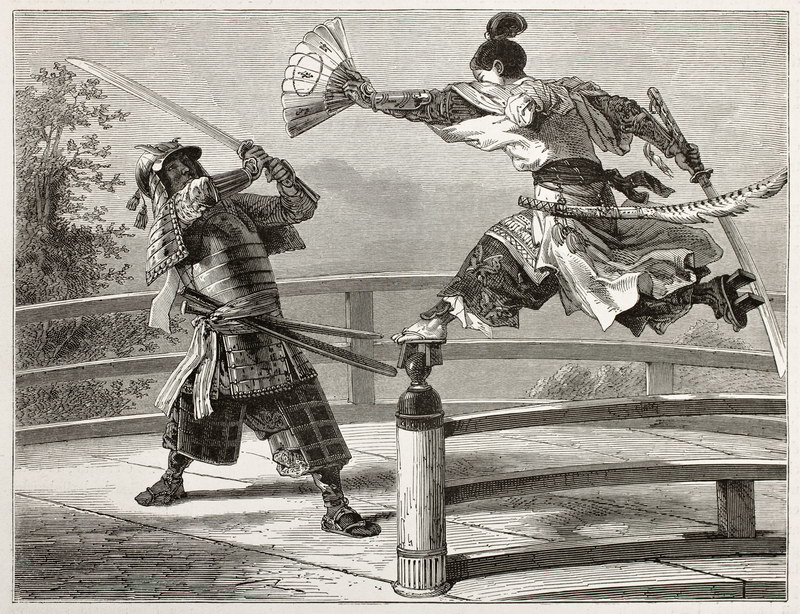 Bokuden’s first real challenge was fighting Ochiai Torazaemon who was already twice his age. Due to the age difference, Ochiai held little to no respect of their duel, actually engaging the audience before their contest.

However, this soon turned into shock as Bokuden easily defeated him but left him alive. This has humiliated Ochiai and therefore planned an ambush to assassinate Bokuden. Some believed that Bokuden was attending a banquet in Takayori Rokkaku when suddenly, an armed man attacked him from behind that was eager to kill him.

Bokuden’s sword during that time was only Wakizashi, but he was able to cut his assailant down. During the battle, he displayed his versatile fighting style by using only his short sword. When questioned why he chose the short sword, he answered,

Which translates to, “It was faster to use the Wakizashi since my enemy was very close upon me.”

Another particular duel that Bokuden had was his battle with Kajiwara Nagato who used Naginata as his weapon. Kajiwara was popular to have easily defeated numerous swordsmen with ease.

In their duel, Bokuden used the weakness of the enemy’s weapon by cutting the bladed head off the Naginata then proceeded to kill his enemy. This dismissed the idea that the longer the reach of a weapon, the more helpful.

Bokuden has undergone into 3 Kaikoku Shugyo with each one lasting about ten years.

His Service under the Daimyo Kitabatake Tomonori 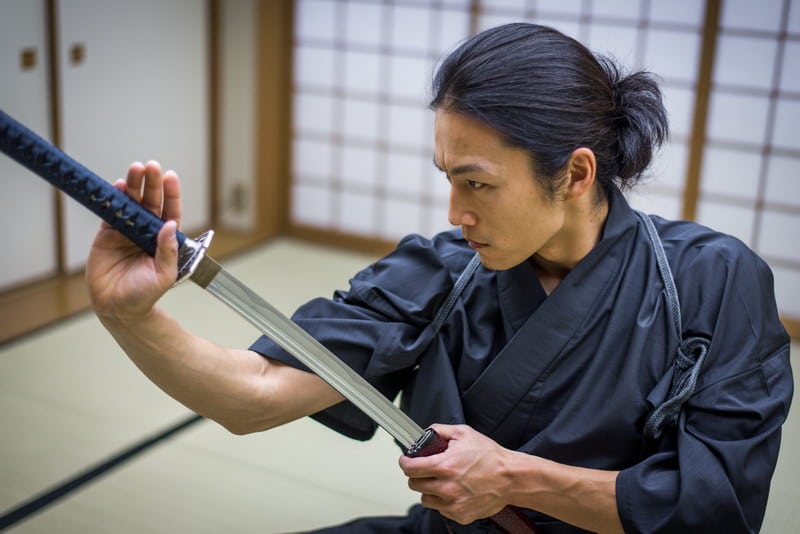 When his trip finished, he returned to his Daimyo and served the army until the Daimyo allowed him to retire at the age of 37. It was then that he settled down and opened his own Dojo called Shinto Ryu.

Bokuden was famous for having a duel 17 times and fought in 37 battles. Some believed that he had not lost a single fight whether it was a battle for his Daimyo or individual duel. Some said that during the war he received six times of arrows from his enemies and still managed to survive.

Others said that his legendary skills, adaptable sword fighting, and clear judgment made him earned the title Kensei.

What sets him apart from the other legendary swordsmen was that later in his life, he grew tired of constantly battling and proving his prowess. He developed a philosophy of avoiding conflict rather than fighting and killing. This philosophy, while commonly practiced today in the modern time was not at all popular during the warring period of Japan.

In the famous book “The Art of War” by Sun Tzu, he stated “To fight and conquer in one hundred battles is not the highest skill. To subdue the enemy with no fight at all, that’s the highest skill.” Bokuden has demonstrated this particular strategy reasonably well.

What is the Art of Fighting Without the Fighting? 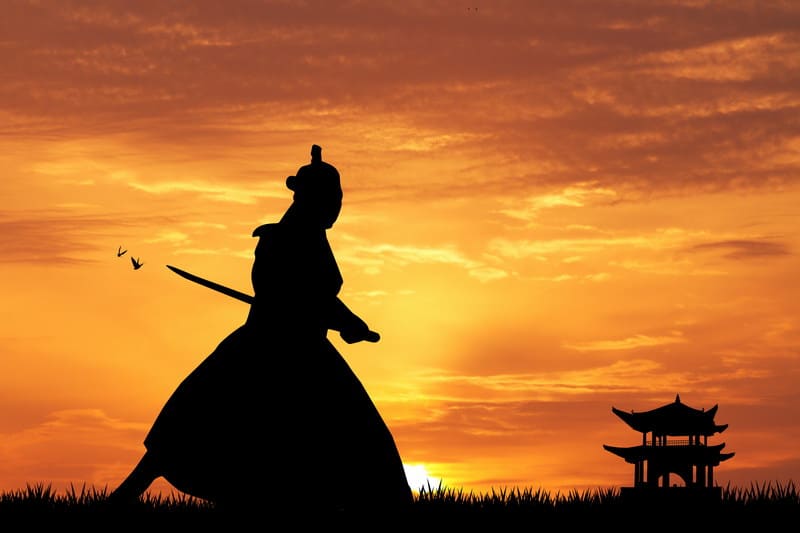 In one of his stories recorded in Koyo Gunkan, there was an incident that an arrogant Samurai challenged him in a battle. The Samurai was bullying the other passengers, and he was bragging that he with his sword fighting style was the best in the country.

The young Samurai noticed that Bokuden was ignoring him. Enraged, he challenged Bokuden, not knowing who he was dealing with. Bokuden told him that his art was different and that it was not so much as “defeating others but in not being a loser.” He also explained that he studied the “Style of No Katana“.

The young Samurai laughed and mocked him. Bokuden agreed to his challenge, and they went to an island where no bystanders could get hurt. They took a boat to cross over, and as they approached, the young Samurai jumped off the boat and drew his sword, ready for battle.

It was then that Bokuden took the oar and pushed off to leave the man alone and stranded. Bokuden smilingly explained that it was how his no-sword style worked. This was such a classic that Bruce Lee incorporated it to his film “Enter the Dragon”. Bruce Lee showed the enemy the art of “fighting without even fighting.”

Though he lived in the warring era, it was such a feat to develop such a peaceful philosophy. Many great masters throughout martial arts history have also believed in avoiding conflict rather than win a fight.

Was the Battle Between the Two Legendary Warriors Real?

Another famous story of Tsukahara Bokuden was his fight with the legendary swordsman Miyamoto Musashi. According to a folk tale, the young Musashi challenged Bokuden over a meal.

Musashi attacked Bokuden first, but Bokuden was quick to counter the attack that he was able to pin Musashi to the ground. There is even an Ukiyo-e print illustrating the supposed encounter of Musashi and Bokuden. However, this could not have been true as Bokuden died about 13 years before Musashi was even born.

Upon Bokuden’s retirement, he went to live in a mountain where many young Samurai came to learn from him. In 1571 by the aged of 83, the legendary Tsukahara Bokuden died of natural cause, leaving his school to his oldest son.

His remains at Temple Baiko of Suga is in Kashima, Ibaraki, wherein a lot of swordsmen who have dedicated their lives to the art of Japanese sword-fighting, would visit since there, in the “spiritual home of Kenjutsu.”