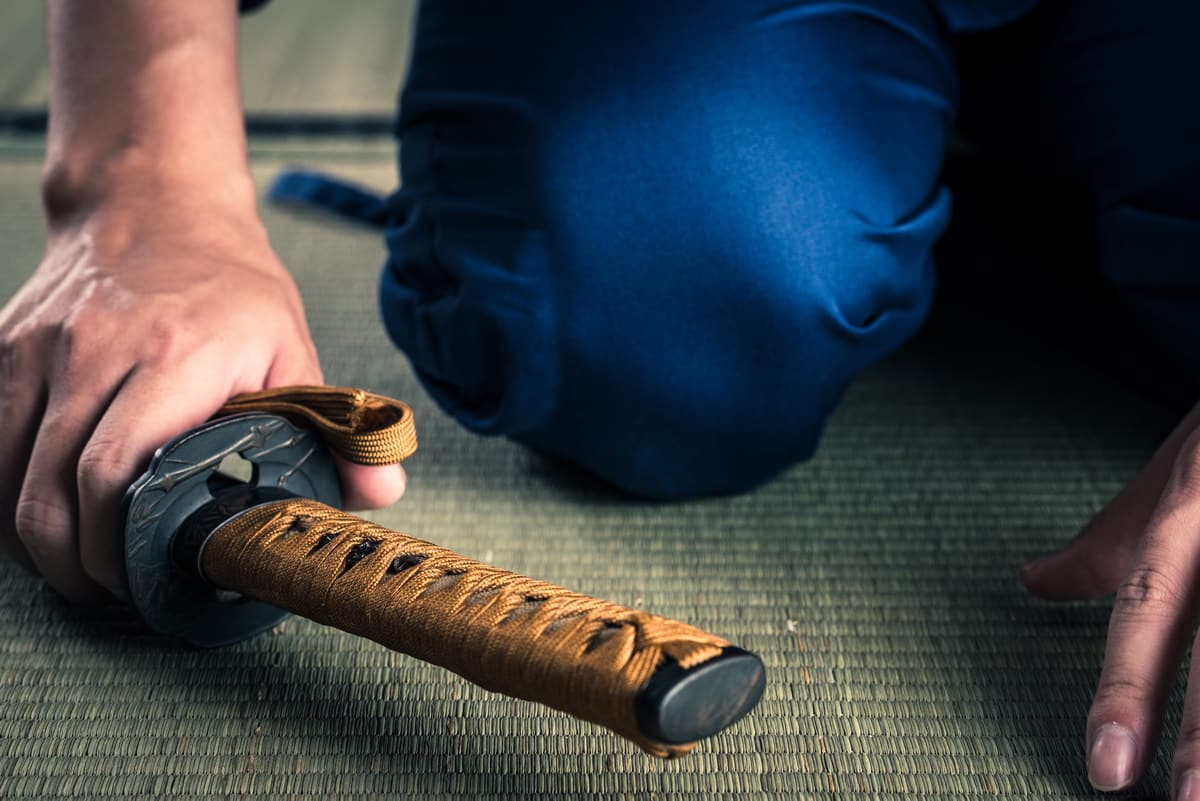 Dual wielding means using two weapons one in each hand while engaging in combat. This combat style is not something that is common. Although there are historical records about dual wielding, these were still very much limited.

Not only that, but many weapon-based martial arts make use of a pair of swords. The utilization of companion weapons is often employed for European martial arts and fencing.

Practicing with two swords or simply, dual wielding, is a unique form of practice. It is also a very risky one. Classic schools of Japanese martial arts also used dual-wielding styles.

Who was Miyamoto Musashi? 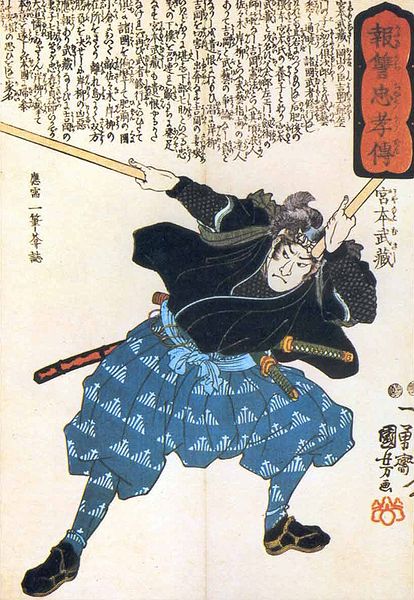 Miyamoto Musashi is a skilled and well-known Ronin and swordsman. He was famous for conceiving the thought of a specific type of swordsmanship that involved two swords. He involved the Katana and Wakizashi for this. The two sword Kenjutsu technique was called the Niten Ichi Ryu.

A few historians claim that Musashi was inspired to make such a technique after seeing one performance. This was of the Japanese Taiko drums. Other claims that he was inspired by his own father’s style of fighting. His father simultaneously used the Katana and the Jutte.

What is Niten Ichi Ryu?

Since there is no fluid movement when the hands are used, Musashi did not favor the use of both hands on a sword. He explained that if a sword was wielded with both hands it won’t be easy to freely use it to either side. 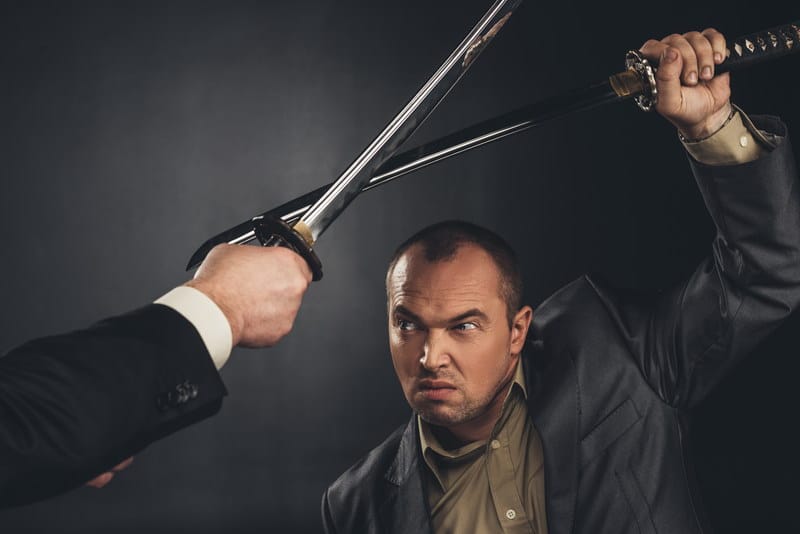 Musashi also disliked the use of both hands during horseback. This was especially when riding in fields, marshes, or among people.

Having mastered the many uses of two swords, he stated that his style would improve one’s mastery of two swords. This was the Katana sword and a companion sword, like the Wakizashi in his case.

Musashi’s argument was if one mastered using the long sword, he will naturally acquire the power of the Way. With that, he would be able to wield another sword with ease.

Note that the Niten Ichi Ryu was based after Musashi’s experience. With this style, one can see the passion for perfection and motivation.  This style became favored due to the practice of using two swords. Yet it also involves styles with the Kodachi, Tachi, and Bo.

The Master of Throwing Weapons

Musashi also became popular because of his skill of throwing weapons. He often threw his Wakizashi in a very accurate manner.

Kenji Tokitsu believes that there was a secret style of the Niten Ichi Ryu. It was the Shuriken technique which is performed by throwing the Wakizashi. 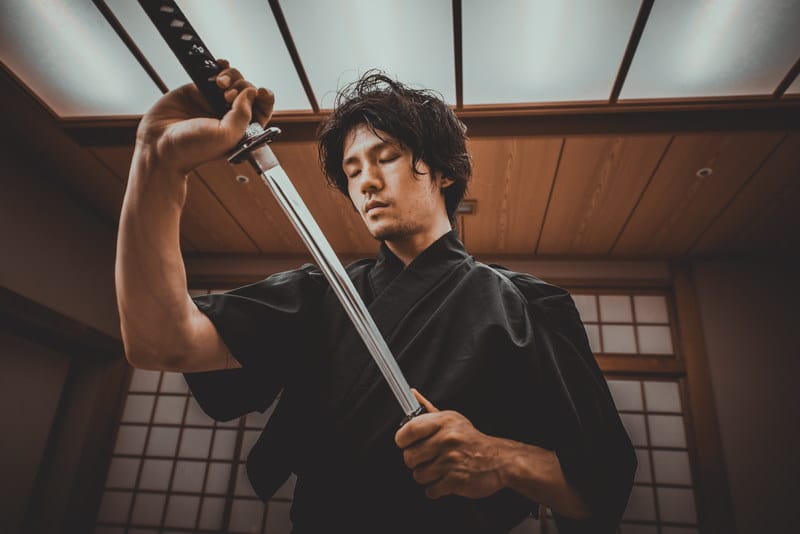 Today, a man named Yoshimoto Kiyoshi continuously practices the style of the Hyoho Niten Ichi Ry. He is a part of its 12th generation of enthusiasts and practitioners.

How to Start Dual Wielding Training

The training for dual wielding is all about preparing. First, you will need to learn how to cut using the dominant hand.

With the dominant hand, you need to be confident in executing the six basic cuts. These include diagonal downs and ups, then a horizontal right and left. It may sound easy but it is tougher than you think. You will come to realize its challenges once you start relying on your off hand.

This is fine. Soon, everyone will understand how much force can be put into the cuts while still being safe. As you progress and move forward with training, the arm muscles and grip will get used to exertion.

Take note that if you overdo the practice, it may cause wrist injuries. Since this is the case, it’s best to go slow and focus on repetitions instead of more strength.

Adequate cutting using one hand is necessary until it feels normal and less awkward. Learn to cut more by starting with your elbow and relying less on your wrists.

Begin with dry cutting then go until you your moves appear satisfactory. Once you are happy with the results, that is when you start trying for targets. Remember, it’s best to master the techniques first before putting out your obstacles.

Avoid rushing since you will eventually reach your goals. Remember to first build your confidence in order to succeed.

Generally, it is all part of the learning process and the knowledge you need. It is not only useful for Nukitsuke, but is also useful for all of your cuts. 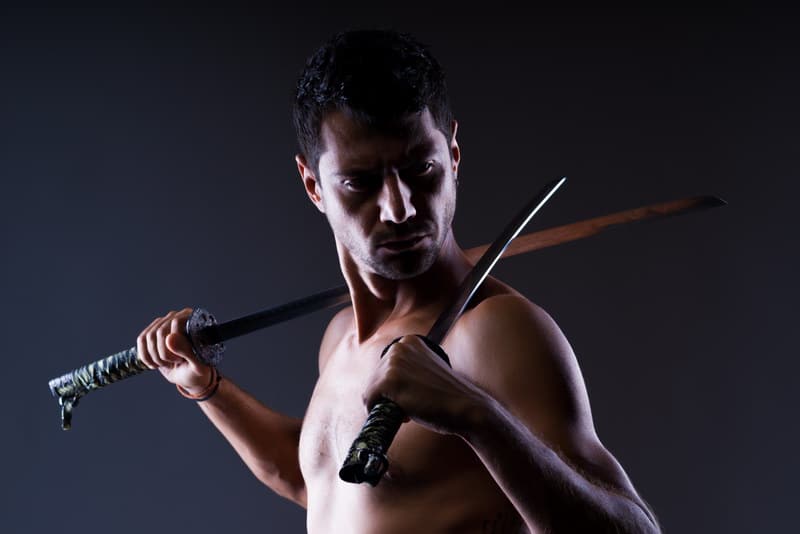 What are the Advantages of Dual Sword Wielding?

Two weapons are better than one.

When in battle with enemies, if they have large weapons like spears, they play aggressively. This is because a long-range battle is their forte. while using 2 swords if you move close, they will surely lose.

They can put lots of force to their attacks and you won’t be able to block. Although in some situations you can get into defensive, while facing a pole arm it will probably better to charge instead. Go right for the kill as they say. He or she will begin to step back so keep up the pace.

What is good about dual sword wielding is your opportunities grow, you can drop the other piece. Grab the shaft of their weapon. you get the idea… Short, light, especially hooked weapons can help dominate larger weapons.

Why is Dual Sword Wielding a Great Technique?

The technique of Musashi was truly unique. It was also against tradition. This is because most warriors had this habit of wielding the Katana with two hands.

The biggest advantage of this technique was its sophistication, power, and efficiency. This also did not involve impulsive, flashy, or unwanted moves. Another advantage is that it gave perfect timing and distance, leaving you with tight attacks.

The best part of it? There are no wasteful movements occurring.

The unique style developed by Musashi Miyamoto has been praised by many. This is due to how it facilitates the efficiency of both weapons simultaneously.

The style also comes with several single sword techniques plus effective throwing methods. Here, he would effectively throw his Wakizashi like how he would a Shuriken.

So, there are big advantages in using your off hand for cutting. Doing so will make both hands useful without relying on just the dominant one. Shaking things a bit like this allows you to appreciate your weak and dominant side. Plus, you can get on the offensive and defensive on either side without worries.